Your cocktail calendar entry for: April
3
No Comments 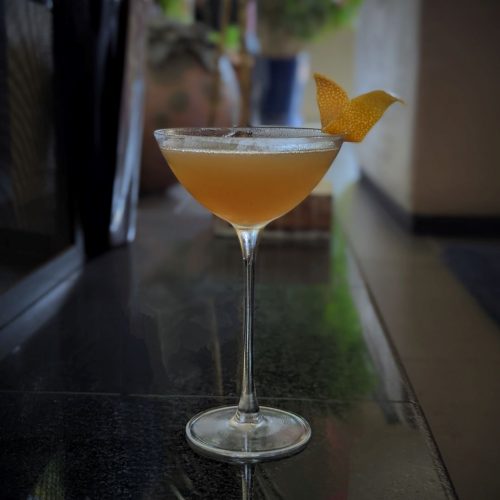 Today at The Drunkard’s Almanac we’re honoring Los Angeles’ iconic Brown Derby restaurants and mixing up the Brown Derby cocktail.  You may not have heard of it if you’re not from Los Angeles city proper or Hollywood, but the Brown Derby was the place to get deals done and have a drink at the same time.  Sadly, the Hollywood location closed on April 3, 1985.  Reincarnations were tried in places like Pasadena but it just hasn’t been the same thing.

The first Brown Derby restaurant opened in 1926 on Wilshire Blvd.  At the time it was pretty much the serious street in Los Angeles, stretching from downtown to the ocean.  It sat right on the edge of what’s now the Koreatown neighborhood, in the thick of the LA action. 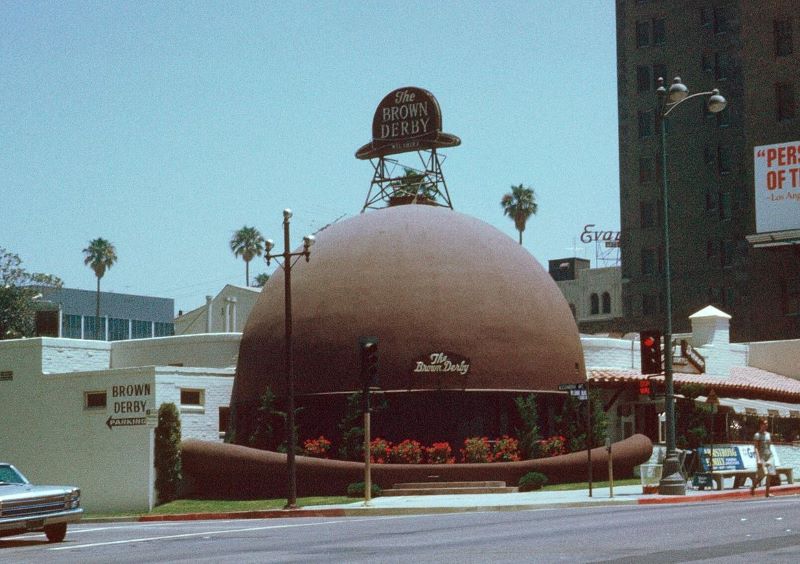 The building was an iconic example of ‘roadside vernacular’ architecture and constructed in the shape of, you guessed it, a derby hat.  Except for a small portion of the menu curiously titled “From the Chinese Kitchen” with exotic dishes like Chicken Chop Suey the fare was decidedly American.  Specialties of the house included things like fresh chicken livers with bacon, creamed turkey and steak hamburger de luxe (sic).  A porterhouse steak and baked potato would set you back a whole $3.  An ounce of genuine Russian Beluga caviar cost $2.  The lobster was $1.40.

Their second Hollywood location is where the real action took place.  Movie studios were close, so stars’ photos adorned the walls and big deals were hashed out.  Legend has it that the Cobb salad was also invented there by owner Bob Cobb.  He hastily made a salad from miscellaneous kitchen items for Sid Grauman and chopped it up because Grauman had just received dental work.  That Grauman, by the way, is the Grauman of the iconic Chinese Theater on Hollywood Blvd.

Unfortunately, both Brown Derby locations closed.  The original went without warning in 1980 and the Hollywood site met its demise in 1985.  The Derby’s hat shaped dome still exists in place, now unceremoniously plopped on top of a generic strip mall.  At least Musso & Frank Grill, Hollywood’s oldest restaurant and the place to go for a Martini, is still going strong in its original location.

Naturally, the Brown Derby also served booze.  Their menu also noted that you could get your favorite bottle from their stocks for your home bar as well.

Dale DeGroff in The Craft of the Cocktail claims that the Brown Derby cocktail was invented in the 1930s at the Vendome Club in Los Angeles.  Strangely enough the basic formula but with slightly different proportions appears in the tome we often cite, The Savoy Cocktail Book, as the De Rigueur Cocktail.  Did one copy the other?  Did they coexist in parallel universes?  We’ll likely never know.  We’re not even sure they served the Brown Derby cocktail inside the Brown Derby.

The recipe here is a good example of drinks from the sours family, consisting of base spirit, citrus and sweetener.  It’s most similar to the Gold Rush cocktail, just substituting grapefruit for lemon juice.  The basic formula is really the same as any number of drinks, such as the Django Reinhardt, the Daiquiri or the Southside. 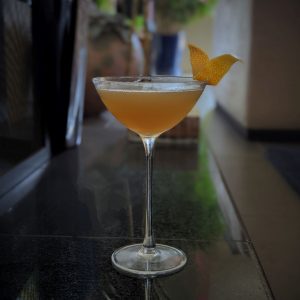 While we don't know the precise origin of this cocktail, we do know it wasn't invented at the iconic Los Angeles restaurant the Brown Derby. A dead simple drink to mix up, it's a variation on a Bourbon Sour, using grapefruit juice rather than lemon and honey syrup instead of simple syrup.
No ratings yet
Print Recipe Pin Recipe 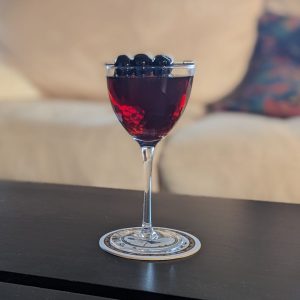 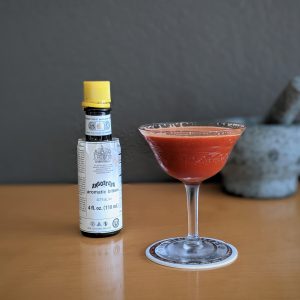