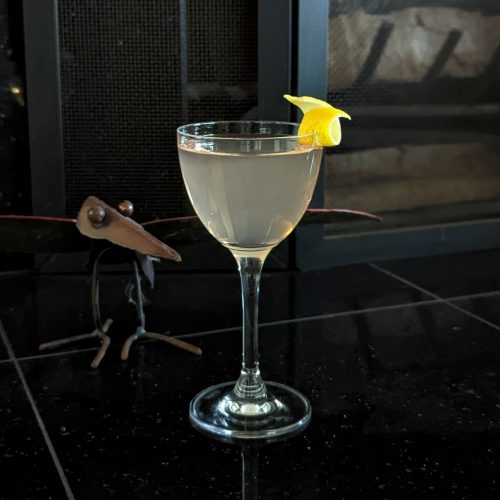 It’s getting to be spooky season now that we’ve reached the end of October, so for Devil’s Night on October 30 we’ll be mixing the Devil’s Own cocktail.  Halloween is, of course, a festive occasion where you can hand out drinks to all the trick or treater’s weary parents.  Devil’s Night, aka Mischief Night, is the night before and is a good time to warm up for the next-day events.

For reasons to follow the Devil’s Own is a good choice for October 30.  But on Halloween, of course, you’ll need something else.  We’ve previously recommended the Widow’s Kiss or Zombie for that evening.  The Corpse Reviver No. 2 is an obvious choice for the day after.  But do remember, as Harry Craddock warned, “Four of these in swift succession will unrevive the corpse again.”

Devil’s Night first arose from a British tradition known as Mischief Night referring to that before May Day, the celebration of the return of spring.  This spread into Europe where it was marked with pranks committed by youth.  Appropriately, the Devil’s Own cocktail comes from Great Britain.

Somehow the mischief making made its way to Detroit, Michigan.  Some historians attribute it to Black Tuesday on October 29, 1929 and the stock market crash ushered in the Great Depression.  Mischief Night ensued, but the hijinks were minor.  Toilet papering trees and homes, egging houses, soaping windows, flaming bags of dog poo.  Just ordinary things you might enjoy.  Mischief Night was largely just an annoyance to local police.

Other cities in the Rust Belt took part in the activities but Detroit was always the epicenter.  Unfortunately, by the early 1970s things took a turn for the worse.  Rising unemployment in Detroit led to a number of foreclosures and abandoned buildings – perfect targets for vandalism and arson.  Pranksters started setting fires, which sometimes spread widely, in abandoned homes and buildings.  It peaked in 1984 when the Detroit Fire Department put out more than 800 fires across the city.  Police and fire departments were unable to maintain control.

By 1986 Detroit enacted a curfew.  Youth under 18 could not be out past 10 PM on October 30 unless accompanied by adults.  Volunteers, under the moniker ‘Angel’s Night’ were recruited as a sort of neighborhood watch.   They enforced curfew and alerted authorities to suspicious activity they observed.

It worked, and in 2017 the city officially ended the program.   Angel’s Night was replaced by a community celebration called Halloween in the D.  Some folks always fear a resurgence, but none has really occurred, and fire rates typically mirror accidental firework-related blazes that occur July 4.

The Devil’s Own Cocktail

The Devil’s Own cocktail bears resemblance to a Martini with a dose of Cointreau, or a rejiggered Pegu Club in which dry vermouth substitutes for lime juice.  Nonetheless, it is quite different from either of them.  The drink was developed by a bartender named Colin Symons and first published in the 1937 Café Royale Cocktail Book Coronation Edition.   (In case you’re wondering, 1937 was the year George VI and his wife Elizabeth became the King and Queen of the United Kingdom.  This Elizabeth was the mother of Elizabeth II, the recently deceased Queen for whom we mixed the Queen Elizabeth cocktail.)

Mr. Symon’s was not a well known bartender and there’s very little information about his career.  By all appearances he mixed cocktails in the style of the times, as his original recipe calls for equal parts gin, dry vermouth and Cointreau.  This leans too heavy on orange for out tastes and is rather sweet as was typical for tastes at the time.

We believe the version presented here, which is bit more gin forward, will play better to modern palates, and we add a lemon twist as a complement. 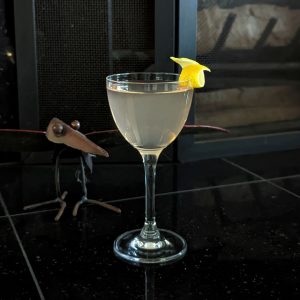 The Devil's Own Cocktail

The Devil's Own cocktail first appeared in the 1937 publication of the Cafe Royale Cocktail Book Coronation Edition. The drink bears resemblance to a Martini with Cointreau added or a Pegu Club with lime juice removed and dry vermouth added. The original recipe called for equal parts of the three ingredients but we present a recipe with proportions modestly adjusted to suit modern palates.
5 from 1 vote
Print Recipe Pin Recipe 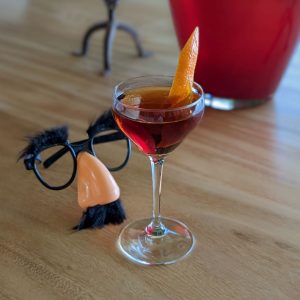