For the Marilyn Monroe and Joe DiMaggio wedding

Your cocktail calendar entry for: January
14
No Comments 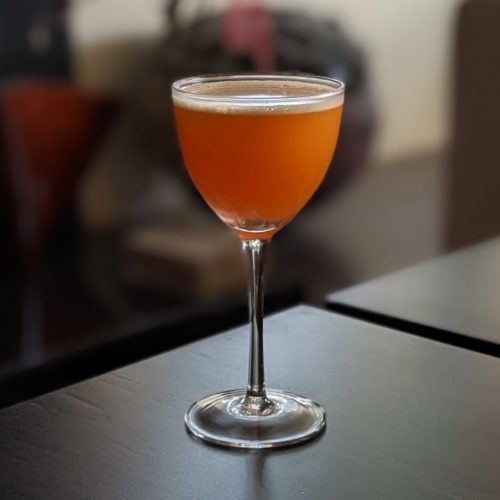 January 14 was the day in 1954 that Marilyn Monroe and Joe DiMaggio began their short lived marriage, so that’s enough to call the Divorce Papers cocktail Drink of the Day.  After all, they were big wheels of that era, a glamourous siren-like movie star and a just-retired baseball player already called the greatest ever.  Their union was brief, but along the way it caught the hearts and attention of the nation.  It’s great fodder for a drink.  Besides, their divorce papers were nowhere near as much fun as the Divorce Papers drink.

Every baseball fan knows who Joe DiMaggio is.  As center fielder for the New York Yankees he became a legend.  He was an All-Star every season over his 13 year career during during which the Yankees won the World Series nine times.  He was considered the best and earned such nicknames as Joltin’ Joe and The Yankee Clipper.  But “Joe D” was enough that everyone knew who you were talking about.

Marilyn Monroe (originally Norma Jean Mortenson) spent most of her childhood in foster homes and an orphanage.  But by 1945 when she would have been 19 years old she started modeling and was deemed more appropriate for pinups than fashion.  She straightened her hair, dyed it blonde, and signed an acting agency contract in 1946.  By 1953 she was an unparalleled sex symbol and one of the most marketable Hollywood stars.  She was The Blonde Bombshell.

DiMaggio retired from baseball after the 1951 season and in 1952 asked a friend to arrange a dinner date with Monroe.  She initially resisted, but they met and the sparks flew.  The courted one another from across country, with Marilyn in Hollywood and DiMaggio on the east coast.  Then on January 14, 1954 they got married at San Francisco City Hall.

Their fans and the press went wild.  A newspaper called them “the Legend and the Goddess.”  It looked good, but trouble was lurking.  Monroe was asked to travel to Korea to perform for American soldiers while the couple was on their honeymoon in Japan.  She agreed to do this, but DiMaggio was not happy about it.  But she was proud of it, and upon her return said “Joe, you never heard such cheering.”  DiMaggio’s sardonic response was simply, “Yes, I have.”

It was downhill from there.  DiMaggio struggled with his wife’s public image.  He went ballistic when he witnessed a scene from The Seven Year Itch being filmed in New York.  Standing on a subway grating, as air blew her white dress, the resulting photo became iconic and a staple of Monroe’s career.  That was apparently the last straw.

DiMaggio wanted a stay-at-home wife while Monroe wanted a husband who was interested in her work.  She filed divorce papers just nine months after their wedding.  Monroe went on to remarry (and get divorced), but after that the Monroe-DiMaggio couple reconciled and remained friends for the rest of her regrettably short life.  She died in 1962 from a drug overdose at the age of 36.

The Divorce Papers cocktail is obviously a solid choice as a toast to this short union and combines both sour and sweet flavors.  It was developed by Leonardo Bernardes at the Ba Bar in Seattle.  An interesting place, the Ba Bar is an uncommon combination:  a Vietnamese restaurant with a serious bar program.

The Divorce Papers recipe is straightforward but requires some unsweetened passion fruit puree.  There are commercial products available, but it’s easier to just pick up a passion fruit or two, scoop the inside into a fine strainer and let it drain.  The seeds are edible, but you just want to push the pulp through the strainer.  The resulting product has a delicious sweet but also tart flavor that works well with the gin, lemon and Aperol.

Passion fruit puree is not just for the Divorce Papers recipe.  If you have extra take a walk on the tiki side with the Luau cocktail or the Saturn drink. 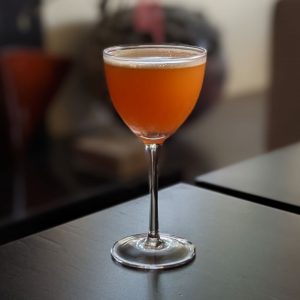 A lot more fun than actual divorce papers, the Divorce Papers cocktail is a delightful gin-based drink that is sweet and tart at the same time. Really another variation on the sours theme (spirit, citrus, sweetener) it gains extra festivity with a bit of Aperol and passion fruit puree.
No ratings yet
Print Recipe Pin Recipe 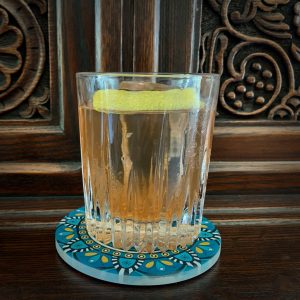 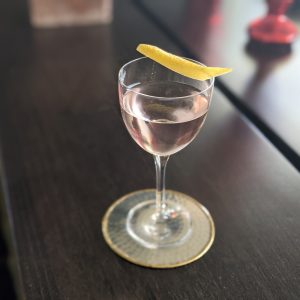 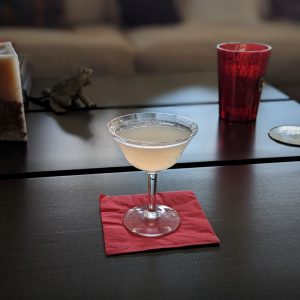