Your cocktail calendar entry for: December
31
No Comments 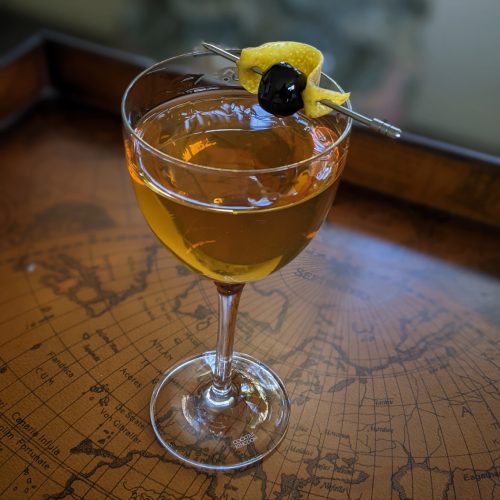 December 31 is time to mix the East India Cocktail because it’s the anniversary of the East India Company being founded in England.  It’s perfect for New Year’s Eve just as the Bloody Mary should be on your schedule January 1.

Of course there’s a lot of history on December 31.  Thomas Edison first demonstrated the incandescent light bulb to the public in 1879.  Sir Anthony Hopkins was born in 1937.  In 1759 the Guinness Brewery somehow signed a 9,000 year lease for its brewery site.  All good stuff.

The East India Cocktail is certainly a good, historical choice for New Year’s Eve.  But it’s hardly the only one.  Of course many thoughts turn to Champagne or other sparkling wine drinks.  If you’re inclined to go down that path we might suggest the French 75.  If you start earlier in the day a few Death in the Afternoon cocktails might just be appropriate.  And, of course, there’s always the Negroni Sbagliato.  Pretty much whatever you feel like is reasonable.

The East India Company was founded in 1600 and there’s a bit of a backstory.  Back in the 1500s seagoing nations such as Spain, Portugal, the Netherlands and England were having a jolly good time sailing across oceans seeking trade for unknown goods and pirating or plundering whatever their peers had come across.

After defeating the Spanish Armada by 1588, the captured Spanish and Portuguese ships and cargoes enabled England to travel the globe in search of riches.  Various merchants hoping to deliver a blow to competitors applied to Queen Elizabeth for permission to run amok in the Indian Ocean.  Conflict of interest laws not quite being what they are now, The Crown would receive a significant share of the spoils.  This resulted in the formation of the East India Company and a granted monopoly to all trade east of the Cape of Good Hope and west of the Straights of Magellan.  The astute reader will note that the Pacific and Indian Oceans combined represent a lot of territory.  As you might expect, a couple of hundred years of festivities ensued.

The East India Company Had All the Fun

The EIC was one of the first companies allowed to raise capital rather than being limited to what its principals could rummage up.  They were also authorized by The Crown to form armed forces and wage wars.  All sorts of fun stuff followed.  You know,  the subjugation and abject plundering of vast tracts of Asia, slavery, narcotics trafficking, governing nations for personal gain and so on.  Carl Icahn, private equity firms….you name it….they’re amateur hour compared to these guys.  They were corporate raiders like none other.

People talk about the British conquering India.  In reality it was the East India Company, an unregulated enterprise managed in India by an unstable sociopath named Robert Clive.  At its peak Clive’s personal fortune was worth around $60B in today’s currency.  Maybe not enough to get him on Forbes’ Top 10 list but not even Warren Buffett has license to invade sovereign nations.

There’s more to it than this, of course.  We haven’t even gotten to the Opium Wars.  That delivered Hong Kong to England and forced China to allow the sale of opium there.  China’s still a bit testy about that course of events.  The EIC eventually attracted scrutiny, so Clive slit his own throat and Parliament dissolved the company in 1873.  We’ll leave it there and move on to our primary interest, an appropriate cocktail.

Luckily there is a drink known as the East India Cocktail and it is today’s Drink of the Day.  The drink first appeared in 1882 in Harry Johnson’s New and Improved Bartender’s Manual and was modified a bit by Johnson in his 1900 edition of the book.  There he added the note that it’s “a great favorite with the English living in the different parts of East India.” 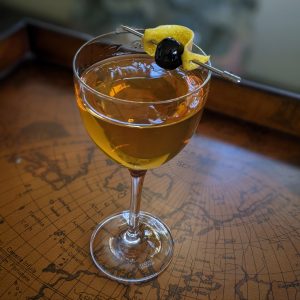 First published in 1882, the East India Cocktail, like other pre-Prohibition cocktails from the “improved” style uses a base spirit and various flavorings to make things interesting.
No ratings yet
Print Recipe Pin Recipe 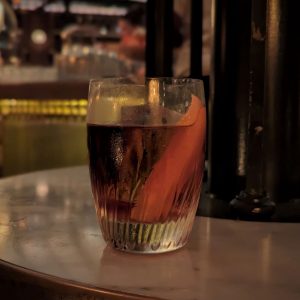 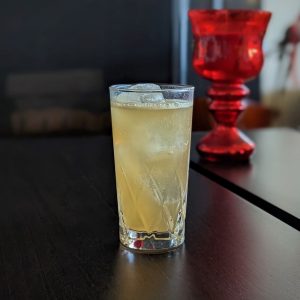