Your cocktail calendar entry for: June
19
No Comments 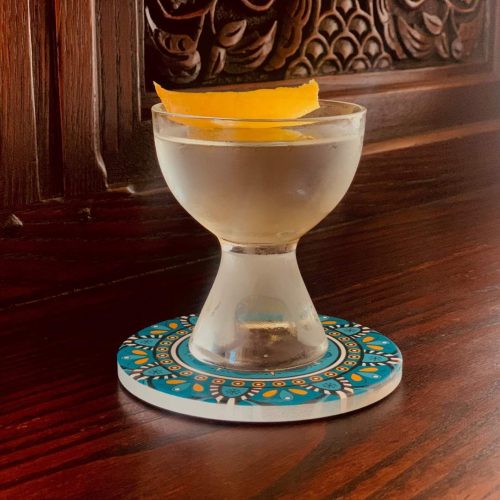 As a public service announcement we bring to your attention the fact that June 19th is National Martini Day.  It’s not a national holiday like Juneteenth, but a martini is never a bad choice and appropriate for any occasion.  On to matters at hand.  For National Martini Day the obvious choice as Drink of the Day is the Martini.  But first we need to consider its history, cases of mistaken identity and other folly hoisted upon this most noble of cocktails, and what exactly to mix.

I never go jogging, it makes me spill my martini” – George Burns

One martini is alright.  Two is too many, and three are not enough” – James Thurber

The history of the Martini, like other classic cocktails, is convoluted.  The people involved were drinking, and the original version didn’t look like what you think of today.

The Martinez is considered a direct precursor to the Martini: it’s a 50:50 mix of Old Tom gin and sweet vermouth, with a touch of maraschino liqueur and orange bitters.  Then of course there is the Marguerite – a 2:1 mix of gin and dry vermouth plus a dash of orange bitters. That first appeared in the 1904 edition of Stuart’s Fancy Drinks and How to Mix Them.  From the 1880s to about 1910 all sorts of variations appeared, including the Martinie, Martigny, and Martineau.  And, of course, the Gibson emerged.

This of course leaves the origin of what we call a Martini and how it received its final name a bit murky.  Theories abound.  Some point to Martini and Rossi vermouth.  Others credit Martini di Arma di Taggia, a bartender at the Knickerbocker in New York.  None of us will ever quite know.  It is, however, strictly a domestic creation.  The journalist H.L. Mencken called it “the only American invention as perfect as the sonnet.”

A Martini is made from gin and dry vermouth.  It does not employ vodka: that ill-advised variation is more properly known as a Kangaroo.  Further, placing a cocktail into a conical bowl of a stemmed glass does not magically make a drink worthy of the suffix “tini”.  That is simply a deplorable practice.  It emerged during the Dark Ages of Drinking from the 1970s to 1990s.  You know, the era that brought us such abominations as the Appletini, the Fuzzy Navel and the Harvey Wallbanger.  And disco.

We should also take a moment to note that a Martini is not to be shaken.  Certain figures have been misguided, and only characters like Franklin Roosevelt or James Bond are given a bye on this practice.  They made other contributions to humanity, like ending Prohibition or performing death defying acts while full of enough alcohol to kill most men.  We should trust the words of W. Somerset Maughan who wrote, “Martinis should always be stirred, not shaken, so that the molecules lie sensuously one on top of the other.”

It also contains vermouth.  In its original meaning, “Dry Martini” denoted a Martini made with dry vermouth, not lack of vermouth.  Sir Winston Churchill gets a pass on his practice of simply bowing in the direction of France only because dry vermouth wasn’t exactly flowing across the English Channel during the war.

So onward to the Drink of the Day.   Readers may face a dilemma due to the Martini being quite flexible in terms of gin to dry vermouth ratio.  One can go so dry that at a 15:1 ratio it becomes a Montgomery.  That was Ernest Hemingway’s favorite version and was named after British Field Marshall Bernard Montgomery.  But today we are going to go back to the roots, to a more original version and call for a 1:1 ratio for the Drink of the Day.

Call it what you will, but Martinis were served with equal parts gin and dry vermouth circa 1910.  While later twisted into extreme dryness, this version revived the Martini from its woeful state.  It was reintroduced to the drinking world by Audrey Saunders at her New York City bar the Pegu Club.  She called it the “Fitty-Fitty” and it caught the attention of the drinking world as a reminder of how good its balance really is.

So let’s get to mixing.

Popularized at Audrey Saunders’ bar Pegu Club in New York, the Fitty-Fitty is a return to the roots of the cocktail, eschewing the machinations of how much vermouth to use and simply making the amount equal to the gin used.  It’s a beautifully balanced drink and may change your mind about what makes the perfect Martini.
No ratings yet
Print Recipe Pin Recipe

Note:  If you’re not already doing it, and you should be, please remember to store your vermouth in the refrigerator.  It really does decline once open and anything that’s been sitting on your kitchen counter or stuck in the back of a cabinet should be tossed down the Sink of Shame™.  For this reason The Drunkard’s Almanac strongly recommends buying vermouth in 375ml, i.e. half bottle size, and storing in the refrigerator after opening. 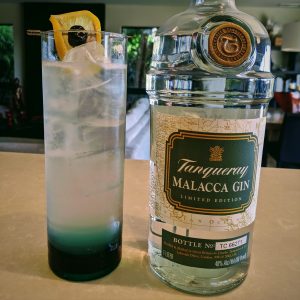 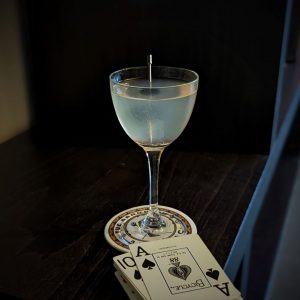 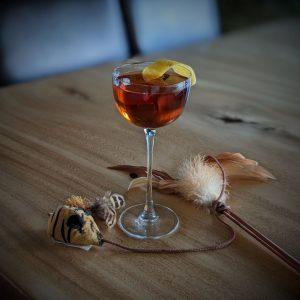