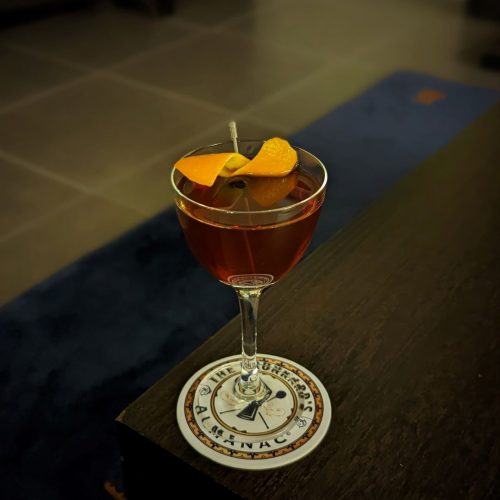 Today we’re going to mix up the Rat Pack Manhattan to celebrate Frank Sinatra’s birthday.  Perhaps the most revered singer of the 20th century and an avid drinker, his birthday is always one to celebrate.  As they say, Ol’ Blue Eyes did it ‘his way’ and sometimes that was a drunk way.  We’ll also give mention to some other Rat Pack favorite cocktails, such as how Sinatra liked his martinis, the Rusty Nail and the Flame of Love.

Born in Hoboken, New Jersey to Italian Immigrant parents, he is generally viewed as one of the great musical artists of the 20th century.

In 1947 Sinatra was singing in a smoky New York bar.  He was interested in ordering a drink and Jackie Gleason made a suggestion: “Jack Daniel’s.  That’s a good place to start.”  That stuck with Frank, and it became the drink he’s most associated with as we covered on his birthday last year with the drink known as Frank’s Way.

He drank a lot of it.  When he confessed to a doctor that he probably consumed a bottle of Jack Daniel’s a day the doctor responded “My God, Frank.  How do you feel in the morning?”

He had a bottle of Jack Daniel’s buried with him when he died in 1998, but it was hardly the only thing he drank.  The Rat Pack – that informal group of entertainers who met one evening at Humphrey Bogart’s house and became friends and business partners – certainly mixed up a few different things.  They’re all classic cocktails and if you don’t so much feel like making the Rat Pack Manhattan go ahead and mix up one of these:

Frank’s known drink lineup left us in a bit of a conundrum about what to name as Drink of the Day, as we try not to repeat cocktails.  Lucky for us, there is another alternative even if Frank wasn’t drinking them himself.

The Rat Pack was famous for staying out all night, their drinking, their parties and their success as entertainers.  The core group after Humphrey Bogart’s death consisted of Sinatra, Dean Martin, Sammy Davis Jr., Joey Bishop and Peter Lawford.

They seemingly ruled the world in the early 1960s.  They drank onstage and promoted presidential candidate John F. Kennedy by singing the Star Spangled Banner at the 1960 Democratic National Convention.  They made the original Ocean’s 11 film while in residency at the Sands Casino and set the tone for the growth of Las Vegas at the time.  They caroused as they pleased.

Luckily for us a bartender named Wayne Collins at High Holborn in London created the Rat Pack Manhattan.  He used four different whiskeys and a Grand Marnier rinse to represent each of the members, but that complication is not really needed.  The recipe shown simply calls for Bourbon, and when you get down to it the recipe is really a Perfect Manhattan with an orange element added from the rinse.

By the way, other Manhattan variations you might like are the Trainspotter cocktail and the Marconi cocktail. 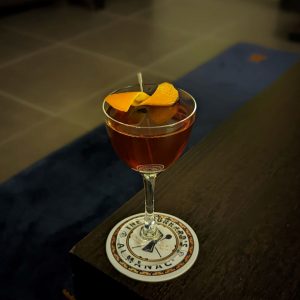 Invented in 2000 by Wayne Collins at High Holborn in London, the Rat Pack Manhattan originally used five liquor elements to represent all the members of the Rat Pack. Four of these were whiskey, and there really isn't any need to get so complicated. We just call for bourbon and leave it at that.What we have here in the Rat Pack Manhattan is really a Perfect Manhattan (i.e. the vermouth component is split between sweet and dry vermouths) with an orange element added from rinsing the glass with an appropriate liqueur.
5 from 2 votes
Print Recipe Pin Recipe 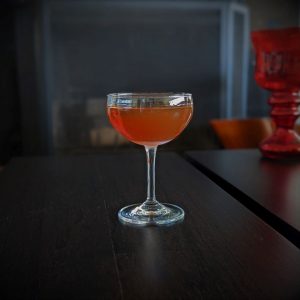 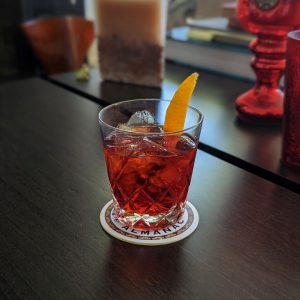