Your cocktail calendar entry for: March
19
No Comments 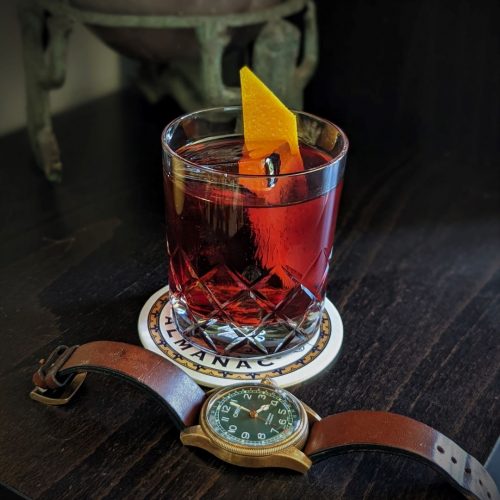 Here at The Drunkard’s Almanac we’ll be mixing up the Arbitrary Nature of Time cocktail.  Why?  Because in the U.S. the Standard Time Act became law on March 19, 1918.  That was the first federal law implementing Standard Time as well as Daylight Saving Time in the U.S.  Then there’s the fact that March 20 is also the Spring Equinox and the U.S. Senate recently voted to make Daylight Saving Time permanent.  So it seems only appropriate to make the Arbitrary Nature of Time our Drink of the Day.

Time Zones, Daylight Savings and All That Stuff

The Standard Time Act (or Calder Act) established by law that standard time in the U.S. would be divided into five time zones.  And those zones would be created by the Interstate Commerce Commission in concurrence with zones previously established by the railroads.

The railroads had been interested in minimizing confusion for a long time.  Prior to them establishing their own four time zones in 1883 there were over 50 separate standards in the U.S.  Hard to see how the trains ever ran on time then.  Congress came to think that maybe standardization wasn’t such a bad idea and in 1916 joint resolutions proposed creating a commission to see about legally standardizing time in the U.S.  There was also a National Daylight Saving Committee that held a two-day convention in New York in 1917 (that sounds like a fun time) and announced its support for a five-month daylight saving period.

World War I was also looming, and daylight saving policies had been adopted by a dozen democracies, mostly in Western Europe.  You see, nations were trying to figure out how to run more efficiently to aid the war effort and daylight savings became a popular solution.  The theory was that it would result in the conservation of fuel, lights and time for everyone.

The U.S. got into the war in April, 1917, and Congress got busy working on the details.  President Woodrow Wilson signed it into law on March 19 of the following year.  Five time zones (the fifth for Alaska) were established and daylight savings was set up for five months.  Confusion reigned, and the debate started.  Daylight saving time was repealed after the war in 1919, has come and gone more than once, and for all we know it may be cast aside again.

All this got us to thinking that the Arbitrary Nature of Time was an appropriate drink in honor of time zones and daylight saving time.  The drink itself comes from a book originally entitled Rogue Cocktails by Maks Pazuniak and Kirk Estopinal, who were working at a bar called Cure in New Orleans.  Then a trademark lawsuit from the Rogue Brewery made them change the name to Beta Cocktails.  It was all self-published so it’s not widely available.

Either way, it’s a spirit forward cocktail that we view as a Negroni variation, similar to a Boulevardier.  It uses Rye whiskey as the base spirit.  The familiar three part Negroni formula augments that with Cherry Heering for the sweet and Campari as the amaro.

The recipe we present is the original and we advise starting there.  Some folks cut the Cherry Heering to 0.5 oz for a drier balance, but we like the recipe as shown.  Either way, you roll your own here so have at it as you choose. 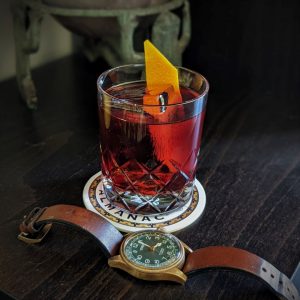 A rye whiskey based variation on the classic Negroni, the Arbitrary Nature of Time is a spirit forward drink from bartenders at a bar called Cure in New Orleans. The recipe shown is the original, and we like the balance of the drink as shown. If you find it a little sweet for your taste we advise cutting back a bit on the Cherry Heering.
No ratings yet
Print Recipe Pin Recipe 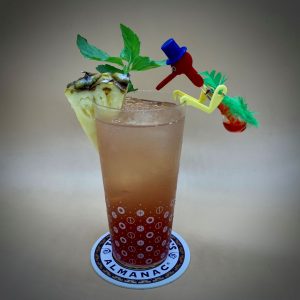