Anniversary of the gunfight at the OK Corral

Your cocktail calendar entry for: October
26
No Comments 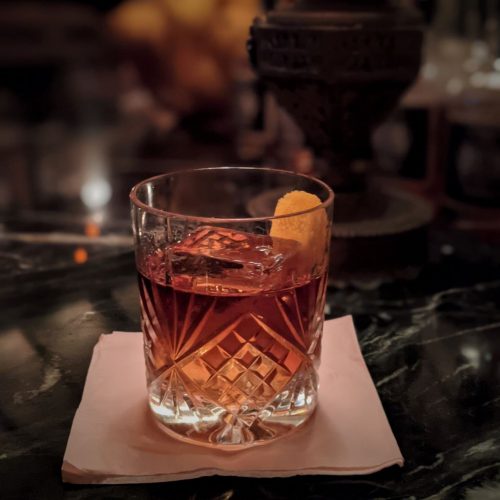 The Revolver cocktail is Drink of the Day for October 26.  Why?  Because it’s the anniversary of the shootout at the OK Corral, the infamous 1881 gunfight that became an enduring symbol of the Wild West.  You’ve probably watched one of the movies, like Gunfight at the OK Corral, Tombstone or Wyatt Earp.  They used revolvers, so the Revolver Cocktail is a natural fit for the day.  We’ll go through the real story and then details of the drink.

The town of Tombstone, Arizona, was founded after silver was discovered nearby in 1877 and grew into one of the largest boomtowns in the West.  By 1881 they even had a bowling alley.  The town also had an ice house, no doubt due to the work of Frederick Tudor, and more than 100 saloons.  So they were civilized and could drink their booze chilled.

The Shootout at the OK Corral

The gunfight itself was the product of a long simmering feud.  It was real Hatfield and McCoy type stuff involving the Earp brothers with their friend Doc Holliday against the cowboys Billy Claiborne, Ike and Billy Clanton, and Tom and Frank McLaury.

By the way, when we say ‘cowboy’ we’re not talking about some good-natured guys riding around on horses, sitting around a campfire and eating beans off tin plates.  At that time the term was used to define an outlaw.  You know – cattle smugglers, horse thieves and other assorted scoundrels.  Upstanding citizens were referred to as cattle herders or ranchers and calling them cowboys was an insult.

James, Earl and Wyatt Earp arrived in Tombstone in late 1879.  The three brothers had moved together between frontier towns working as lawmen, pimps and saloon owners.  Quite the resume.  They tended to interpret the law in a way beneficial to their gambling and saloon enterprises.  At the same time the cowboys resented the influence of these town residents over county law enforcement.

On October 25 Ike Clanton and Tom McLaury came into town for supplies.  The next day Billy Clanton, Frank McLaury and Billy Claiborne joined them.  They ran into Doc Holliday in a saloon, who was happy to tell them their brothers had been pistol whipped by the Earps.

Around 3 PM on the 26th the Earps and Holliday spotted the cowboy gang over by the OK Corral.  Historians debate who shot first, but the gunfight itself lasted about 30 seconds with about 30 shots fired.  When the dust settled, Billy Clanton and the McLaury brothers were dead.  Virgil and Morgan Earp and Doc Holliday were wounded.  Ike Clanton and Billy Claiborne had run off.

Considering the nature of today’s event, and the hardware in use at the time, the Revolver cocktail is a natural fit as Drink of the Day.  It’s alarmingly simple and was created in 2004 by Jon Santer at Bruno’s in San Francisco.  Bruno’s, however, didn’t have a crowd inclined to look at a cocktail menu.  It wasn’t until Santer took the drink to Bourbon & Branch that it really took off.  The Revolver cocktail was soon adopted by influential bars across the country and is now accepted as a modern classic.

The Revolver cocktail recipe is a lot like a Manhattan, but substitutes coffee liqueur for sweet vermouth and adds some orange bitters.  The only unusual aspect is the flamed orange twist.

How do you flame an orange twist?  It’s not difficult, you just need a match or lighter as we describe in the recipe below.  And you can enjoy the same pyrotechnics with the Flame of Love cocktail on Dean Martin’s birthday.  of course, if you’re not up for flame you can just use an orange twist.

The Revolver can be served up in a stemmed glass or over ice.  Your choice, and no posse will come after you if you choose one over the other. 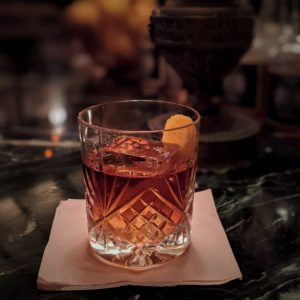 A variation on the well-known Manhattan, the Revolver cocktail brings coffee liqueur to the party and calls for a flamed orange peel. A 2004 invention of Jon Santer in San Francisco, the Revolver has become established as a modern classic. Serve it up in a stemmed glass, or in an Old Fashioned glass over a large cube. Your choice, we won't draw pistols on you either way.
5 from 3 votes
Print Recipe Pin Recipe 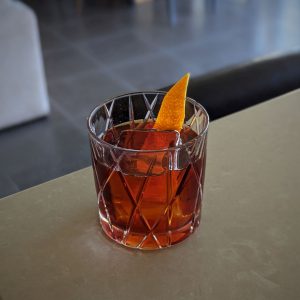 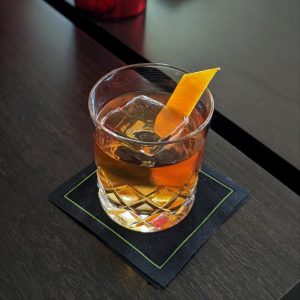